New Publication: “Britain and the United States in Greece” 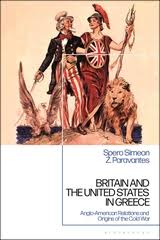 The book reveals how the relationship between Britain and the US developed in this formative period, arguing that Britain used the fast-escalating tensions of the Cold War to direct US policy in Greece and encourage the Americans to take a more active role – effectively taking Britain’s place – in the region. In the process, Paravantes sheds new light on how the American experience in Greece contributed to the formulation of the Truman Doctrine and the containment of communism, the structure of Greek institutions, and ultimately, the birth of the Cold War.

The flyer for the book can be accessed under the following link: Britain, the US and Greece UK flyer

The Weblink for the book can be found here: https://www.bloomsbury.com/uk/britain-and-the-united-states-in-greece-9781788310413/