Translation and the cultural Cold War

Posted on 19/03/2021
in: Categories: News, Publications and Uncategorized. 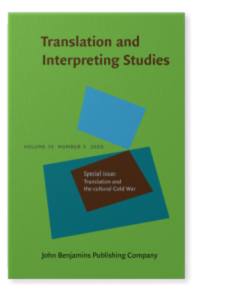 The Cold War Research Network (CWRN) is proud to present the new special issue edited by its member Esmaeil Haddadian-Moghaddam together with the CWRN coordinator Giles Scott-Smith on Translation and the cultural Cold War.

Overall, in the bipolar arena of the Cold War, translation was a crucial tool used by superpowers in the ideological battle between opposing conceptions. More precisely, both written and spoken forms of translation were employed as cultural weapons to influence the masses and captivate people to support the ideas and models characterizing one side of the Iron curtain.  Despite the central role played by translation during the Cold War, this aspect related to cultural diplomacy has received little interest from academia, hence requiring precise and comprehensive studies to be analyzed.

Seeking to fill this historiographical gap, this new interdisciplinary issue sheds light on the role of translation during the Cold War bringing together academics specialized in history, cultural and literary studies. The result: a wide variety of case studies ranging from the former Yugoslavia, the Middle East, the Soviet Union and East Germany, highlighting the role of translation in social, political and historical dimensions of the Cold War.

Are you interested in reading more on this topic? Open this link to find the special issue!

Posted on 19/03/2021
in: Categories: News, Publications and Uncategorized.
Back