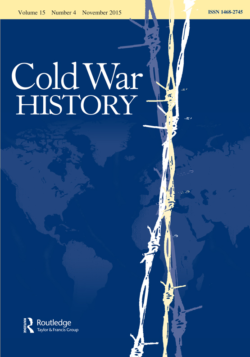 We have another interesting call for submissions for anyone interested in contributing!

Possible formats include:
● state of the field essays – less formal and more reflective and personal than historiographic reviews
● interviews conducted by junior scholars with senior scholars working in the same area about research, methodology and change over time
● roundtables addressing anniversaries of important events during the Cold War or key developments and debates in sub-fields

We assume that it is no longer sufficient or advisable to promote ‘new’ approaches over so-called traditional approaches (i.e. power politics), because the latter has been in hibernation and degradation for quite a while and is much in need of reinvigoration. Also, while the traditional emphasis on political and military aspects of the Cold War from the Western side continue to flourish, the Soviet factor has been fading away, to the point of bringing us to the situation of the 1970s, when the superpower aspects of the Cold War resembled ‘one handed clapping’.

While submissions must be written in English, the journal encourages contributions which recognise the importance of non-English language scholarship and sources to our understanding of the period. Where funds allow, the journal may be able to assist with the translation and editing of work by scholars for whom English is not a first language.