Book Launch: Freedom on the Offensive by William Michael Schmidli

This December the Cold War Research Network is delighted to invite you to the presentation of William Michael Schmidli’s new book Freedom on the Offensive: Human Rights, Democracy Promotion, and US interventionism in the Late Cold War (Cornell University Press, September 2022). 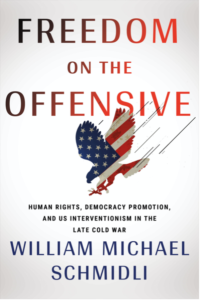 The book argues that democracy promotion by the Reagan administration was used to ‘refashion the bipartisan Cold War consensus’ which had disintegrated in the late 1960s due to opposition to the Vietnam War. Schmidli sheds new light on how democracy promotion was a key component of American’s human rights agenda and foreign relations in the late 20th century.