Revisiting the Spanish Question: The Netherlands, Spain and the United Nations during the early Cold War, 1945-1950 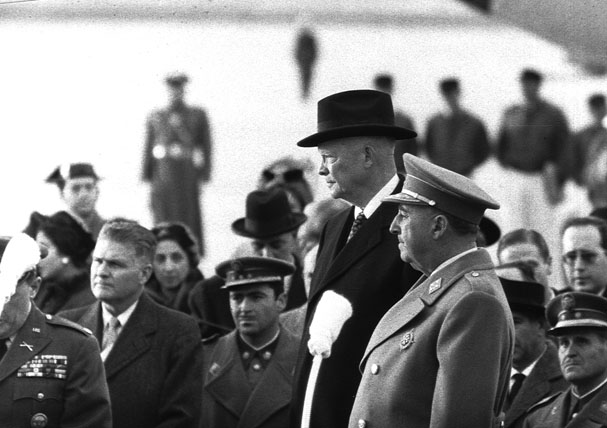 Revisiting the Spanish Question: The Netherlands, Spain and the United Nations during the early Cold War, 1945-1950

In 2020, the United Nations (UN) celebrated its 75th anniversary. The Netherlands was one of the 51 states that joined the multilateral organization from the start in 1945. In the case of Spain, it would take another 10 years to become a member of the UN. The delayed membership resulted from the question whether Spain, where dictator Francisco Franco was holding the reins of power, should be allowed to join the organization. This problem became known as the Spanish question, an issue that played out during the early Cold War.

Traditionally the Cold War is depicted as a bipolar conflict between the superpowers, the United States and the Soviet Union. In this line of thought, smaller powers like the Netherlands did not have any significant influence on world politics. However, recent research has established that the Netherlands was not just a powerless member of multilateral organisations like the European Community and the North Atlantic Treaty Organization. On the contrary, the Netherlands acted as a gatekeeper and critical ally regarding the question whether authoritarian Spain should be allowed to join these organisations. This blog explores the policy decisions and motivations of the Dutch government regarding the Spanish Question in the context of another multilateral organisation, the UN.

As the Second World War on the European continent came to an end, the Allies considered how to deal with dictatorial Spain. At the San Francisco Conference (April 25-June 26, 1945), during which the United Nations Charter was drawn up, it was decided that countries affiliated with UN enemies should not be allowed to join the organisation. At the consecutive Potsdam Conference (July 17-August 2, 1945), the United Kingdom, the United States and the Soviet Union subsequently declared that they would refuse membership of Franco-Spain as the regime had come to power with the help of the Axis powers while the Franco dictatorship had also affiliated itself with the Axis powers during the Second World War.

However, with the unfolding of the Cold War, epitomized by crises such as the Berlin Blockade (June 1948–May 1949) and the outbreak of the Korean War (June 1950), the isolation of strategically located Spain was reconsidered. The United States was particularly interested in pursuing the Franco regime as its ally to counter the spread of communism. Ultimately, on 4 November 1950, the UN General Assembly adopted Resolution 386 (V), titled “Relations of States Members and Specialized Agencies with Spain.” This resolution stipulated that maintaining diplomatic relations with Spain would “not imply any judgment upon the domestic policy of that government,” thus revoking the recommendation of Resolution 39 (I) to recall ambassadors and envoys from Madrid. This ended the international isolation of Spain and opened the way for Spain’s accession to the UN on 14 December 1955. 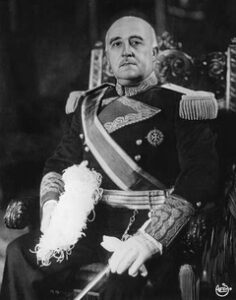 ‘Francisco Franco in 1954, one year before the admission of Spain into the UN’

The Dutch government took a cautious stance with regard to the Spanish Question. The Minister of Foreign Affairs, Eelco van Kleffens, declared in April 1946 that he preferred a democratic system in Spain. However, he was concerned that international pressure may either result in a civil war or strengthen Franco’s position.  Measures against the Spanish dictatorship would therefore imply unjust interference in domestic affairs. It is plausible that developments in Indonesia also influenced the Dutch standpoint. The Dutch government did not want any external mingling in its efforts to maintain control of its much cherished colony Indonesia, where a struggle for independence was taking place.

In the meantime, the Franco regime tried to influence Dutch voting behaviour ahead of the General Assembly of 12 December 1946. Given that the Netherlands were one of the few countries with an accredited envoy in Madrid at the time, the Spanish Ministry of Foreign Affairs assumed that the Dutch stance could influence the voting behaviour of other Western countries.

As it turned out, the Spanish scheme did not materialize. The Dutch delegation abstained from voting on Resolution 39 (I), thereby deviation from the voting behaviour of almost all Western member states. The new Dutch Minister of Foreign Affairs, Pim van Boetzelaer van Oosterhout, stated that the abstention was based on a practical consideration. In the end, the Dutch government decided to abstain as it believed that a vote against the resolution could be interpreted as a statement of support for the Franco regime.

Despite the abstention, the Dutch government followed the resolution’s recommendation to recall ambassadors and envoys from Madrid. Although this was considered an unfriendly act by the Spanish regime, it did not mean that the Netherlands would not have any diplomatic representation in Madrid as another diplomat was assigned to the legation to act as a temporary agent 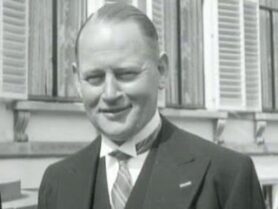 In October 1948, nearly two years after Resolution 39 (I), the Dutch Ministry of Foreign Affairs started to reconsider its position regarding Spain. This resulted in the recommendation to pursue a more realistic policy with regard to Spain. Resolution 39 (I) had failed to achieve its stated goal of replacing the Franco regime with a democratic system. Moreover, it was argued that Dutch interests in Spain could not be sufficiently protected due to the absence of an accredited envoy.

The changing international context also contributed to the reassessment of the Dutch position regarding the Spanish Question. The communist Soviet bloc was now seen as a threat to world peace, while the Franco regime was on the side of the Western powers in terms of the communist threat. The United States and most Latin American countries therefore sought a normal treatment of Spain. Based on these considerations, the Ministry of Foreign Affairs argued for the resolution to be withdrawn on the basis of legal and practical arguments without this being a statement of support for the Franco regime.

This new stance did not imply that the Dutch government was prepared to anticipate matters by appointing a new envoy as Resolution 39 (I) was still in effect. Two years after reconsidering its standpoint the Dutch delegation voted in support of Resolution 386 (V). The new Minister of Foreign Affairs, Dirk Stikker, clarified that there were many practical objections to the isolation of Spain which made it difficult to involve Spain in all types of international matters. Another decisive factor was the clause that stated that maintaining diplomatic relations did not imply a diplomatic judgment of the Franco regime.

Within four years, the Dutch government went from not voting on Resolution 39 (I) in 1946 to supporting Resolution 386 (V). It did not take the Dutch government long to restore diplomatic relations with the Franco regime. On 22 February 1951, the new envoy offered his letters of credence to Franco. Ultimately, the unfolding of the Cold War had turned the tables for the Franco dictatorship. Spain joined the UN on 14 December 1955, making 2020 not only the 75th anniversary of the UN but also the 65th anniversary of Spain’s membership of this multilateral organization. 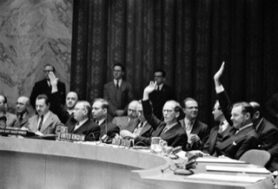 ‘The 1955 UN Security Council Resolution: Admission of New Members to the United Nations including Spain’

Dr. Stefanie F. M. Massink is a lecturer in History of International Relations at Utrecht University. She teaches BA and MA courses on Europe and the Cold War, Dutch foreign policy, and Spain in an international context. Stefanie wrote her PhD dissertation about the Netherlands and the Spanish transition from dictatorship to democracy and is currently writing an article about the Netherlands and the Spanish Question.

Interested in reading more about the Netherlands and Spain during the Cold War? Please see the following publications: