Bridging the Transatlantic Gap: The Dutch Balancing Act between NATO and the EEC in the 1980s

The first hundred days of any American Presidency are traditionally analysed for indications of the policy priorities of the new administration. American President Joe Biden’s first three months in office understandably largely focused on the American response to the Coronavirus pandemic. However, diplomats and scholars have highlighted some advances from President Biden, a long-time ardent atlanticist, and his Secretary of State, Antony Blinken, that differ starkly from the policy approaches of his predecessor. Unlike Donald Trump, Biden believes in multilateralism and in American investment in the North Atlantic Treaty Organisation. In February of this year Biden remarked at the Munich Security Conference that ‘America is back.  The transatlantic alliance is back.  And we are not looking backward; we are looking forward, together.’[i] This renewed partnership for collective security and Biden’s strong commitments to unite NATO and support the European Union, do however, give historians the opportunity to look backward on American-European relations in modern history. An interesting case in point is the NATO-EEC relationship during the Cold War, which can easily be studied through the lens of the Conference on Security and Cooperation in Europe (CSCE), where both alliances interacted with each other. In line with recent themes from the CWRN’s seminar series focusing on small state actors, this piece will focus on the role of the Netherlands as a mediator and bridge builder within the Western Bloc during the CSCE in the 1980s – a period that is as rife with tensions, as is our current period, exacerbated by the recent tensions with Belarus.

The CSCE follow-up conference in Madrid (1980-83) took place in the wake of the Soviet invasion of Afghanistan and coincided to a large extent with the Polish Crisis. Much of the CSCE literature is dedicated to the Western introduction of human rights into the process, something on which the Dutch pride themselves in particular. In order to draw lessons for the current crisis in European security it is, however, very interesting to look at the CSCE through the lens of a “safety-valve for the hotpot of international relations”, as Soviet ambassador, Yuri Kashlev, called it.[ii] While blocs like NATO, the EEC and the WTO coordinated their efforts, complete unanimity was needed for the agreement of a final document for each of the CSCE conferences, giving small and neutral states an equal voice to the superpowers. In this process the EC-countries had a particularly prominent role, since the nine member states of the European Community (EC-9) formed a formal grouping within the CSCE structures since 1972, which meant that when it came to the CSCE, NATO’s actions depended on approval of the EC-9 who coordinated Foreign Policy through the European Political Cooperation (EPC).

Contrary to conventional wisdom, the Dutch preferred a pragmatic approach towards security to a principled one on human rights. Defusing international tensions was the number one priority, and in order to do so the West had to present a united front. According to Dutch reports, “the lack of a veritable confrontation” in the wake of the Afghanistan invasion, was due to a “demonstration of unity” and the “good relations between the nine [EC] and the fifteen [NATO].”[iii] The Netherlands, as one of the most atlanticist nations in the EPC, played the role of bridge-builder, cultivating common ground between NATO and the EC governments. The CSCE offered the Netherlands, a small nation, an arena to expand what Crump and Erlandsson call their ‘Margins for Manoeuvre’, and offer a disproportionately influential role in cementing Western Unity, by on the one hand firmly anchoring themselves in the EPC, while also bonding with American and British diplomats in particular to further their transatlantic aims.

The way in which the Dutch attempted to balance these interests, clearly shows in the EC’s proposal of a Conference on Disarmament in Europe (CDE), which was traditionally the domain of NATO, and which coincided with a Warsaw Pact proposal on the same issue. The EC-members chose to develop this proposal themselves as they wanted to retain control over a subject that disproportionally affected them more than the Americans and they were concerned about public opinion in their own countries during the Euromissile Crisis. They also aimed to preserve European détente despite the breakdown of superpower détente in the wake of the Soviet invasion in Afghanistan, leading to ‘deep-seated differences’ with Washington.  For example, the Dutch used shuttle diplomacy within the Western Bloc to generate unity in December 1980, when the American delegation threatened to vote against the French proposal for a European Disarmament Conference. The Dutch expressed the view that given the tense international situation at the CSCE, a breakdown in the relationship between the United States (US) and France (and through her, the EPC) was the “worst-case scenario for Madrid”. The Dutch delegation’s strategy was to on the one hand support its French allies, while on the other to “use its position as loyal partner in the Atlantic alliance to gain Washington’s goodwill”. In 1981, during the initial drafting of the CDE proposal, the Netherlands used their six months as President of the EC Council to prevent the drafting of exclusively internal documents, forcing discussion between the EC-10 – joined by Greece in this period – and NATO in an attempt to improve relations. The Dutch simultaneously worked with NATO to form common Western strategy and tactics. The Netherlands agreed with the American ambition to see equal progress on human rights, which NATO and the US were emphasising, and disarmament, which the EC-members were demanding. However, the Dutch delegation considered it “illusory that the Netherlands could achieve all its ambitions concerning human rights” at the CSCE and recognized the American disinterest in the Pan-European process. “Concerned about cracks in the cement of the Western house”, it was preferable for the Dutch to build as broad a support base as possible, but the EPC was always paramount. 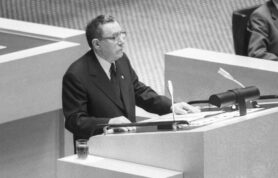 The CSCE as “safety-valve”

Another major test to Western unity was the response to the Polish Crisis, which escalated when Poland’s First Secretary General Wojciech Jaruzelski placed Poland under martial law to counter political opposition from the Solidarity trade movement on 13 December 1981. At this time, the CSCE seemed to have reached its final stages, and the Dutch delegation expected “a political breakthrough before Christmas”. During the Polish Crisis the Netherlands was no longer president of the EC Council. As the EPC discussed how to respond to martial law in Poland there were a number of opinions voiced including proposals for specific motions mentioning the crisis. The Netherlands, with other small nations, did not want to stop the CSCE like the Americans, however they did not want the discussion to return to the normal, pre-crisis negotiations. The US sanctions on the Soviet Union despite Soviet non-intervention was an example of Reagan’s anti-Soviet antagonism, and NATO considered the Soviets equally responsible for the Polish Crisis. The Dutch, however, considered it “of the utmost importance to keep the CSCE going as forum for dialogue”. Although the EC and the US were originally divided on how to respond, the Europeans were successful in convincing the American President Reagan not to walk away from the CSCE meeting, which they had wanted to do as early as February 1982, in the name of protecting the perception of Western unity. This shows that small nations such as the Netherlands could have a large influence on Western behaviour. 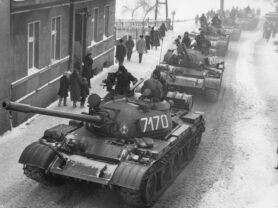 Poland held the presidency of the first plenary session in Madrid and adjourned before the Western countries could speak to criticize Poland’s domestic situation. In response the Belgian delegation as President of the EPC spoke on behalf of all Western parties. Eventually, the conference did return to business as usual, despite the situation in Poland. However, the diplomacy within the CSCE and within the Western bloc had calmed the tensions that arose from the Polish crisis, with the CSCE indeed acting as a ‘safety valve’ for releasing conflict pressure.  During the Polish Crisis when the US were pushing for more progress on Human Rights assertions from the East, the EC governments needed to fight even harder to get agreement on the CDE. Eventually, a concluding document was signed in September 1983, which included both the CDE and a Human Rights conference, which the Dutch considered “clear proof of the vitality of the CSCE process”. Its vitality was indeed underscored by the Stockholm Conference on Confidence- and Security-Building Measures and Disarmament in Europe from 1984-1986, which was a compromise on proposals from either side of the Iron Curtain and testified as such both to East-West collaboration and to Western unity. In January 1984 the CDE actually became part of the NATO strategy, and the Atlantic partners had been convinced of the necessity for a structured disarmament negotiation process. This represented a major victory for the EC governments and a justification for the effectiveness of EPC.

Both these cases illustrate that the gap between the Atlantic partners was more than geographical, and that the Netherlands played a key role in bridging that divide. The CSCE was the first test platform for the EPC, and contributed to the development of European actorness in the global arena. Crucially, the EC members recognised this actorness in themselves. This is seen in the opinion of the non-NATO Irish government that ‘“the Ten” and “the West” were not synonymous terms to be used interchangeably’, and that ‘the Ten should not be treated as a sub-group within a broader western grouping’.[iv] While concerned about human rights, the EC members prioritised fostering European détente to ensure peace in the region where East met West, while the Americans, on the other side of the Atlantic, primarily concentrated on Human Rights progress. The Netherlands as a country that aimed for balanced progress on both issues worked with the two allies to eventually reach a common position in the interest of both Western unity and European détente. Although there is currently more consensus between the American administration and EU members on, for example, sanctioning Belarus, the OSCE has not yet managed to act as a “safety-valve for the hotpot of international relations” in the way the CSCE has. In the age of increasing nationalism and authoritarianism in countries of the former Soviet Union and warnings of a new Cold War, Western unity and the transatlantic relationship will therefore be more central than ever to global security.

For further research directly related to this blog see:

Crump, LC and Grundmann, LA 2018, ‘‘Enemies of Détente’? Eastern European Strategies in the Conference on Security and Cooperation in Europe in Belgrade and Madrid, 1977-1983’ East European Journal of Diplomatic History, vol. 4-5, pp. 187-212.

Romano, A 2017, ’Re-designing military security in Europe: cooperation and competition between the European community and NATO during the early 1980s’, European Review of History: Revue européenne d’histoire, vol. 24, no. 3, pp. 445-471.

[iii] All citations on the Dutch stance are based on diplomatic cables from Madrid to The Hague and from The Hague to Madrid in the Archives of the Dutch Foreign Ministry and could be found in files 2466, 2739, 2891, 3897, 4129.

[iv] Angela Romano (2017), ‘Re-designing military security in Europe: cooperation and competition between the European community and NATO during the early 1980s’, European Review of History, vol. 24, no. 3, p. 455.